Functional Magnetic Resonance Imaging (fMRI) measures changes in the oxygenation of blood in the brain to determine which regions are most active during an experience.

What is FUNCTIONAL MAGNETIC RESONANCE (fMRI)

fMRI is a technique used often in neuroscience, but less popular in neuromarketing. An fMRI is a scan that uses a strong magnetic field and radio waves to create a 3D image of brain activity. To conduct an fMRI study, a participant lies on a bed that is retracted into a large metal tube where an algorithm is used to measure changes in the brain's magnetic field. fMRI is commonly used in academic research, but in neuromarketing, it's not as common as it is very costly, slow and complicated.

fMRI is an effective way to identify the locations of small changes in brain activity. However, it is thought to have poor reliability and is subject to over-interpretation because of the large amount of data collected1. fMRI is not optimized to predict behavior2 but is focused on identifying the most active areas in the brain during a certain task.

Since MRI machines are very bulky and exceptionally expensive to maintain3, measurement can only be conducted in a laboratory setting by individuals who have been extensively trained in the technology and in working with the data. Researchers can typically only collect data from one individual at a time, and some people report feeling claustrophobic while inside the MRI tube.

As a result of these complexities, it typically takes months to execute and get insights from a project employing this methodology. Additionally, fMRI lacks in the extreme ecological validity so it is very difficult to cheaply and easily scale to wide audiences.

fMRI is widely recognized in neuroscience and considered a fairly reliable measure of neural activity.

fMRI requires that study participants are in the lab in an enclosed metal tube, which detracts from the experience and many individuals report feelings of claustrophobia, causing a major impact to their experience with your content.

fMRI data takes months to process and requires professionals to interpret data to identify actionable insights, if any.

Since you can only measure one individual at a time, fMRI measurements are not easily scaled to wide audiences.

An fMRI scan uses a very large magnet to cause the electrons in brain cells to spin in the same direction. A radio frequency pulse then changes the direction of spin temporarily and the return to the axis of the magnet varies for oxygenated and de-oxygenated blood.

How Immersion is Different

Immersion does not require large equipment to scan the brain. It is scalable to huge audiences simultaneously in natural environments, using the smartwatches people already own.

Immersion passively identifies the electrical signature of the neurochemicals our brains produce to understand your audiences’ connection to your content and accurately predict their future behavior from that measurement.

Immersion is ecologically valid, meaning it takes place in any environment without requiring specific context from your audience that could interrupt the integrity of their experience. Immersion is scalable to any audience size in any setting - using the smartwatch they already wear. 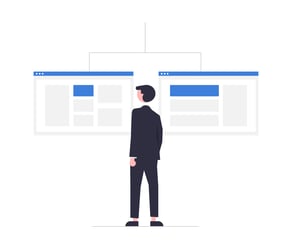 EMOTIONAL DATA YOU CAN USE

Immersion is based on 20+ years of research performed by experts in neuroscience and has been proven to predict future action based on neurologic responses of your audience with over 80% accuracy.

Not only does Immersion pinpoint the moments of emotional connection or disengagement - it shows exactly what that means for driving future action in your audience.

Immersion pinpoints the exact moments in your content or experience that your audience is most likely to remember. This helps predict future action based on what is happening in those moments.

Processing data from fMRI can take week or even months and requires costly professionals to interpret data and report back. Immersion's measurements appear in visually compelling data to create nearly instant insights anyone can understand.

fMRI requires an analyst to interpret data so every study is open to different implications, creating another source of non-reliability. Immersion’s second-by-second analysis pinpoints exact moments to improve and drive action.

Don't take our word for it.  Try it yourself on any video you want. Right. Now.